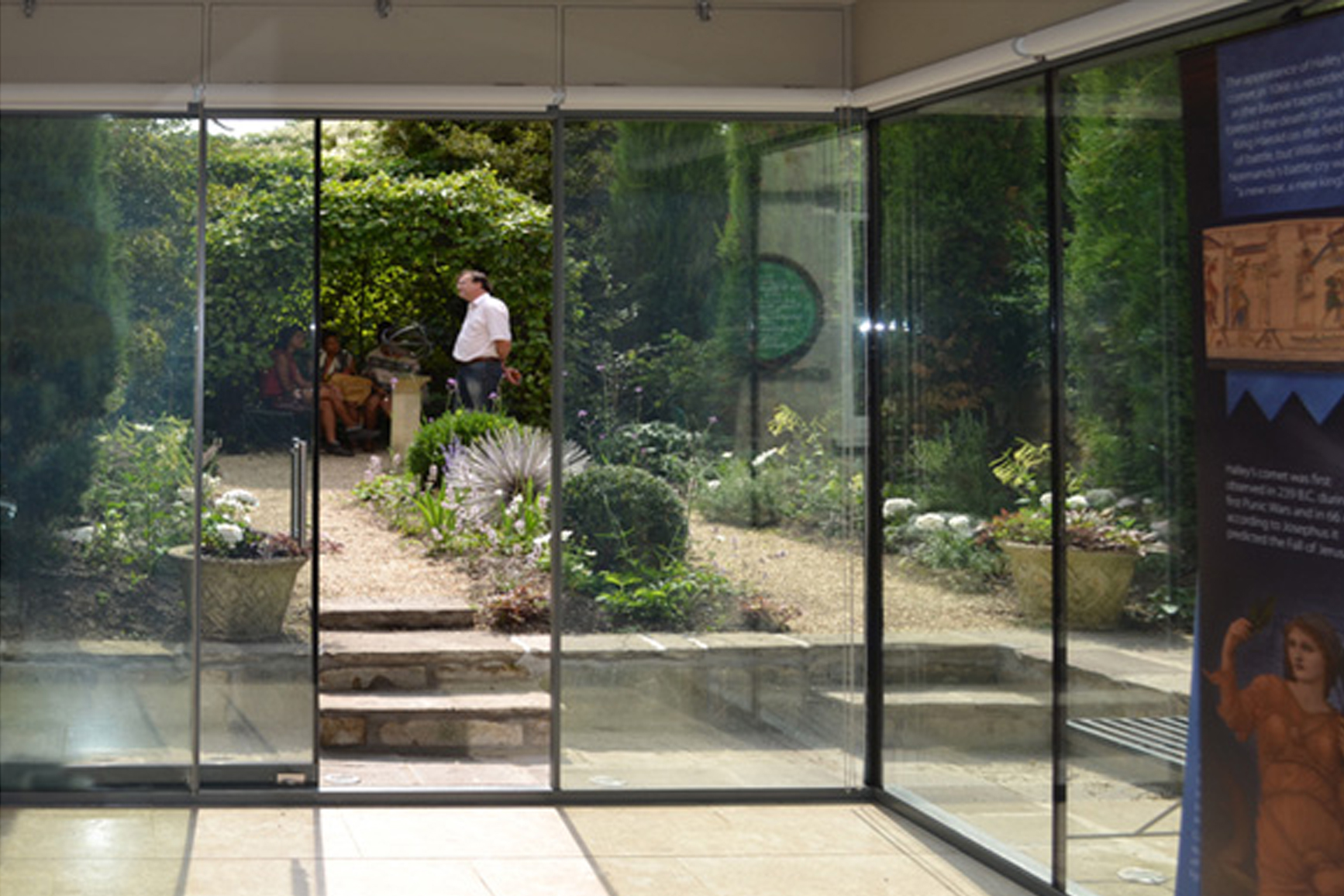 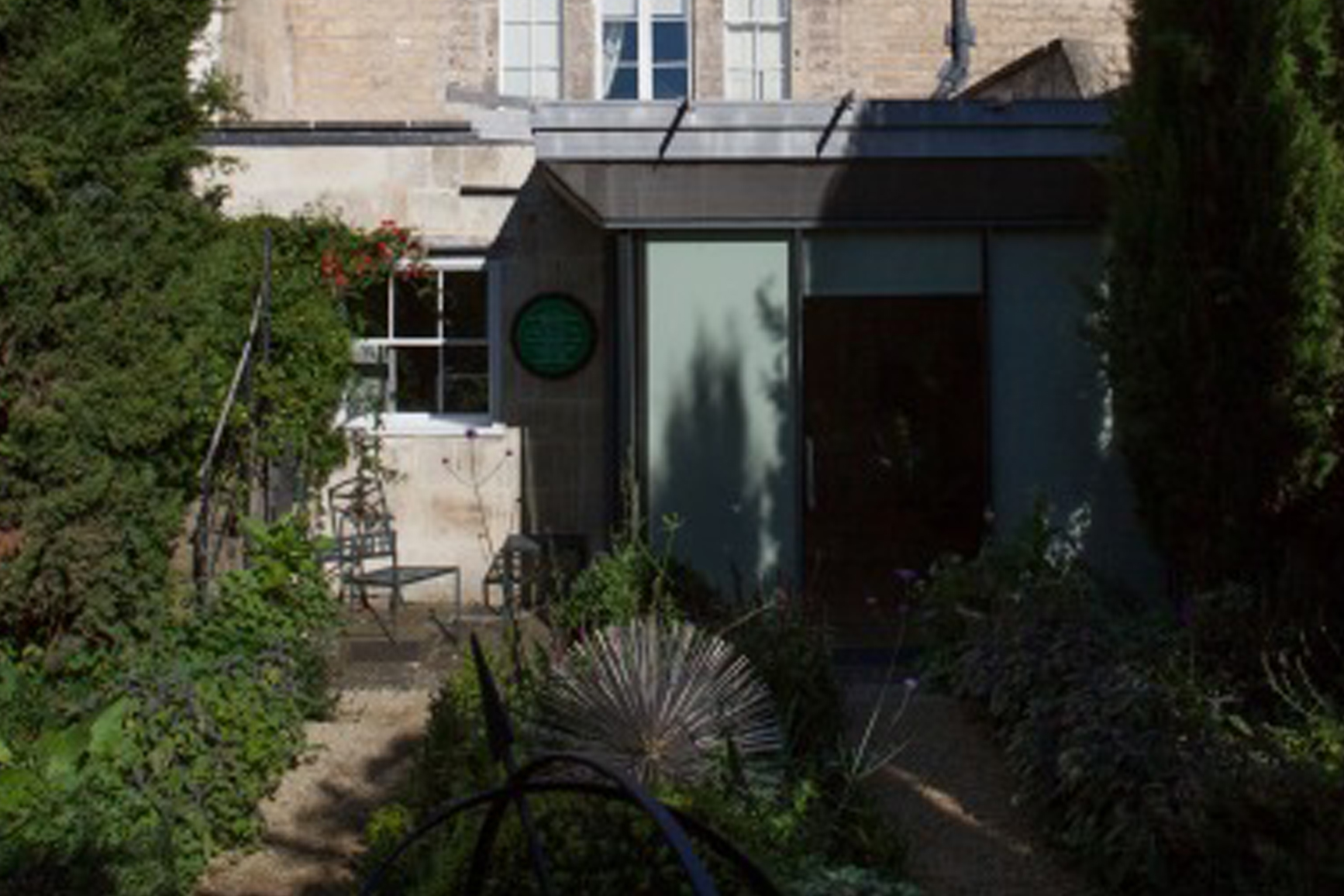 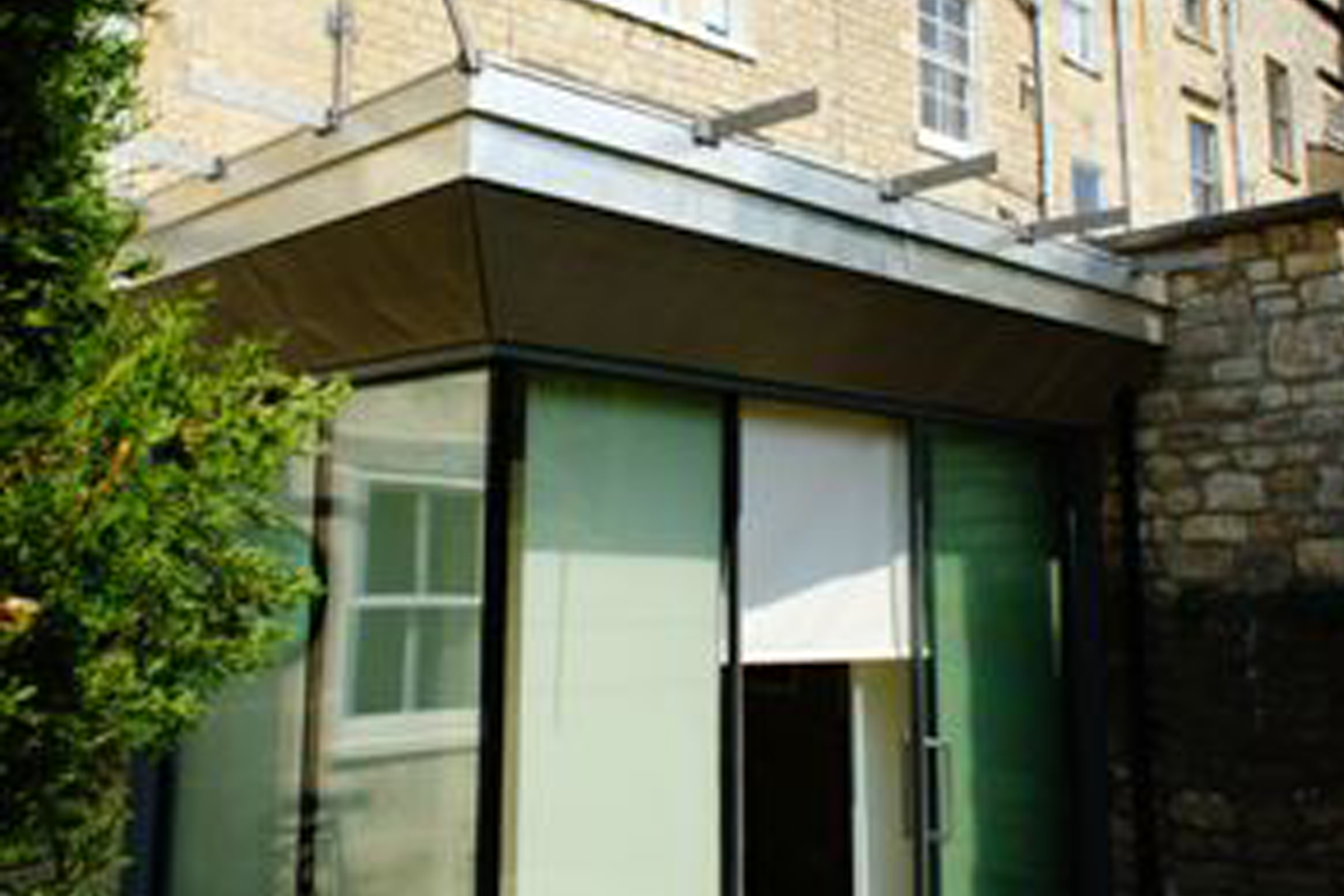 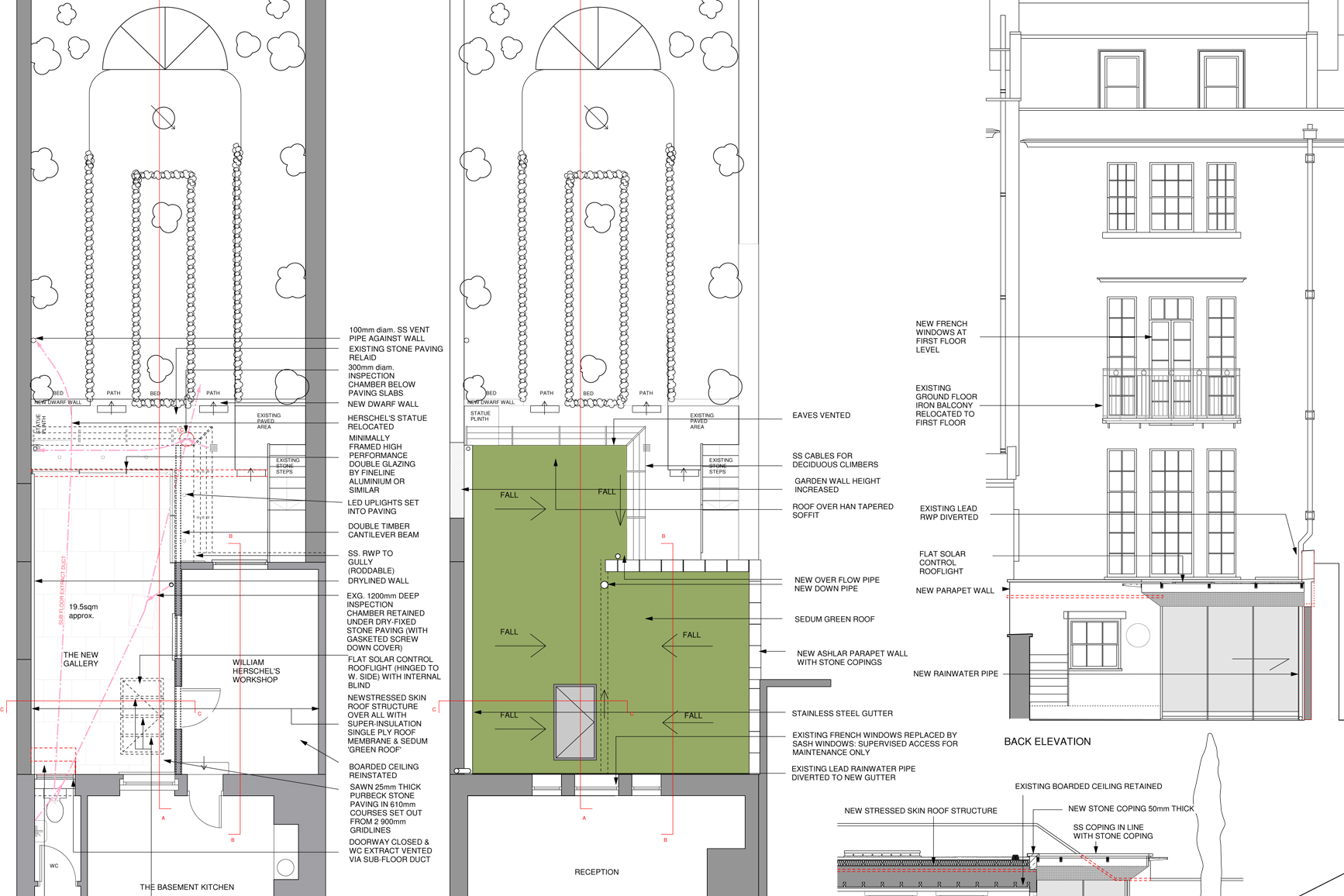 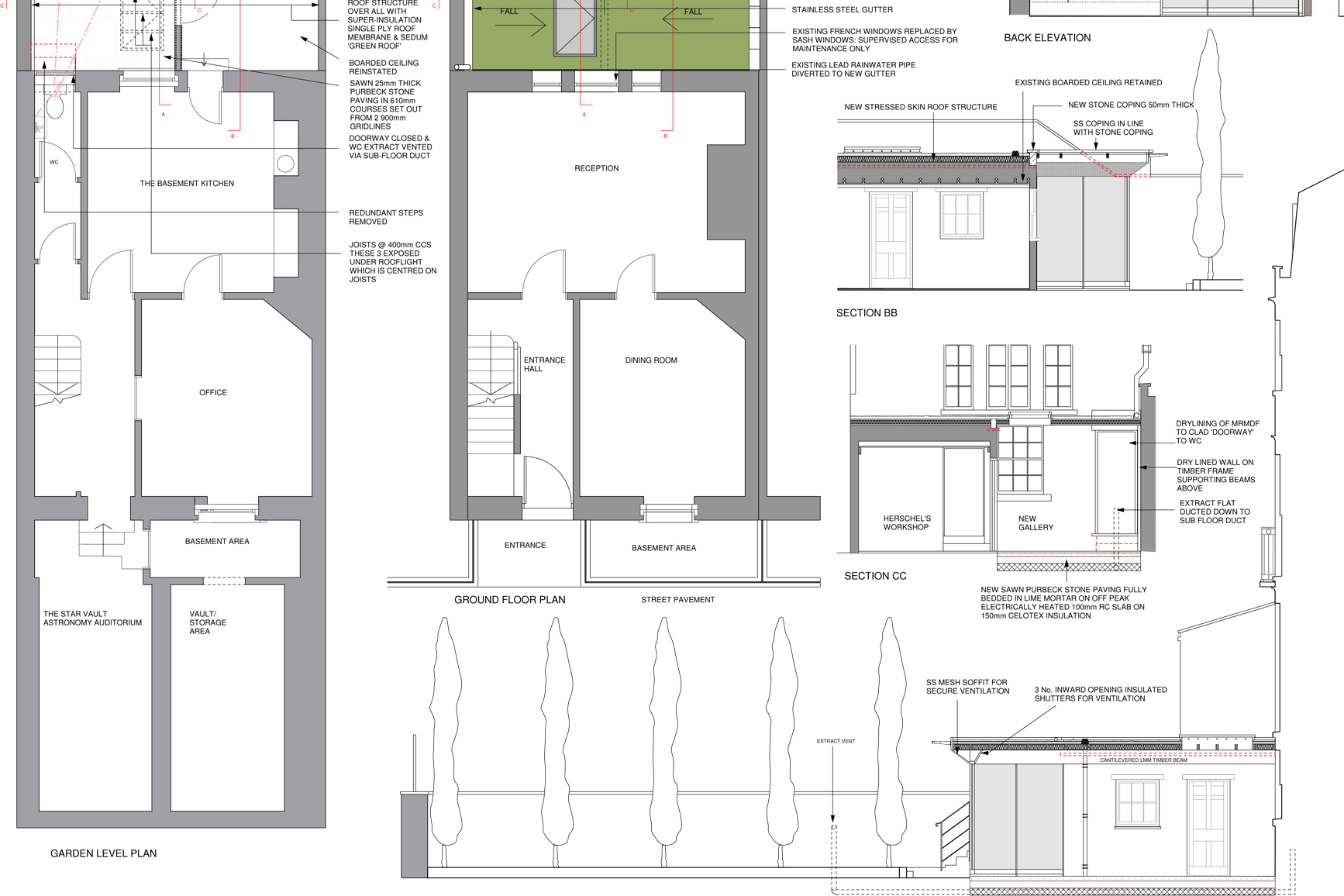 The Herschel Museum in Bath needed extra exhibition space in a new extension at garden level. It was important to preserve the original house as it was unchanged since Herschel lived there.

The Museum needed planning and listed building consent for a new exhibition space in order to apply for a National Lottery Grant to help finance the building of it.

The walls of the extension were to be in traditional Bath Stone Ashlar, so that the interior walls were similar to the exterior walls of the building. The floor was to be of a flag stone of the period of the house. Under-floor heating was chosen so as not to have radiators on exhibition walls. Large floor to ceiling folding sliding doors were to be used to be able to see into the garden.  The extension was set forward of the existing extension so that a door could open on the side of the extension into the paved area in front of the garden. The roof was to have deep overhangs to avoid direct sunlight and overheating of the gallery space. A green roof was introduced so that you could see a green space from the first floor balcony windows.  A system of wires with deciduous plants were introduced so that when the leaves were green  in the summer months extra shade was produced and when the light was less harsh in the winter more light is introduced into the gallery when the leaves had fallen off.

After discussions with the Local Authority, the conservation officer did not think the green roof was appropriate so this was changed to a traditional lead roof. The flagstones that we wanted were also changed from a warm Bath Stone like colour to a stone that was grey which was the stone traditionally used in street paving.  After amending the application the Museum received planning consent and was able to apply for the Grant by the deadline. The grant was awarded and the extension has been built and won a design award.